×
This website uses cookies. We inform you that this site uses own, technical and third parties cookies to make sure our web page is user-friendly and to guarantee a high functionality of the webpage. By continuing to browse this website, you declare to accept the use of cookies.
Accept
Organ

Organ of the Matthias Church

We have no written records of the first organs of the main church in Buda, but only references, for example, in the Thuróczy Chronicle, which reads: "... the bells of the temples were drawn and in them the trombone, organ and music glorified God.") that in Matthias's time there were organ builder masters in Buda, like Stefano Lorenzo, whose small positive, allegedly made for Matthias' order, is currently on display at the Correr Museum in Venice. It is likely that the temple was also equipped with an organ.

The Church of the Assumption was used by the Turks as a mosque in 1541. When Buda was liberated in 1686, the building was occupied by the Jesuits, who soon repaired it from the Queen's donation. The musicians' gallery was also equipped, and in 1688 Archbishop György Széchényi of Esztergom donated a hundred organs of positive organ to the church. Just seven years later, Pál Esterházy, a music lover and composer palatine, expanded the chorus of the church to raise the light of the musical masses and erected a new organ, possibly larger.

Esterházy's organ worked for almost three decades. In 1723, during a fire, the temple's front wall fell and destroyed the instrument. In the same year, the Jesuits re-archived the choir and soon equipped it with a new "suitable" organ. The Benedictine monastery lived in the middle of the century, the church was even more brightly decorated. It was then that a contract was made with a certain organ builder named Martin, who, probably in 1747, made two identical instruments for the Jesuit and Franciscan churches of the castle, the Church of the Assumption and the Virgin Mary. His own handwriting testified to this on two facades of the organ of the latter church, which was demolished in 1934.

In 1768 they began to build a larger musical instrument again from the legacy of a 2015 comrade. We don't know the builder. This organ was also featured in Franz Liszt's Coronation Mass in 1867. In 1874, when the church began to be rebuilt, it was valued for sale, which left a very detailed description of it. We do not know any more about his fate, according to his contract Antal Dangl took over the organ in Arad, who built the next instrument. After nearly twenty years of restoration work, Dangl made a new organ for the coronation church, which opened. Its carved, neo-Gothic house was designed by Frederick Schulek.

The angel statue on the organ cabinet is believed to recognize the features of Ferenc Liszt. The wardrobe of 1893 also serves as the frame of today's organ. Dangl's organ was a three-manual, mechanical, tapered instrument. It soon became apparent that, due to its poor disposition and structural deficiencies, it could not meet the music and artistic needs of the temple. A new instrument had to be built to which, on the occasion of the 40th anniversary of the reign of Franz Joseph as Hungarian King, he donated 50,000 crowns from his private fund.

The work was entrusted to the Rieger Organ Factory in Jägererndorf, which in 1909, according to the plans of Viktor Sugár, built a late-romantic, four-manual organ with 77 registers (Op. 1500), called the King's Organ. Manual whistles were placed in the attic of the temple, according to the fashion of the time, and his voice was guided into the temple ship through a 14-meter-long wooden belt on the ceiling. An organ was also planned for the so-called "small band" in the north, but it was not ready at that time.

In 1931 (again, according to Sugar's plans) the instrument was expanded to 86 registrars by the Rieger factory in Budapest. During the rebuilding, the whistles were removed from the attic and the interior arrangement of the organ was altered in an extremely unfavorable way. The huge play table was replaced with a smaller one and - for the first time in Europe - equipped with the American Setzer combination, which made it possible to store various tone combinations, greatly facilitating the organist's work during the performance. The instrument, which was heavily damaged during the Soviet siege of 1944, was temporarily rebuilt after the war. He was completely overhung, suppressed due to inadequate wind supply, his voice silent and pale. Its condition was getting worse and eventually it was inevitable to rebuild. In 1979 a committee was formed with the help of Ferenc Gergely, István Koloss, István Baróti and organist Bertalan Hock.

The "symphonic" organ, which combines the valuable and still salvable whistles and structural elements of the old instrument, combines romantic and baroque style features. The reconstruction was completed by the Rieger-Kloss organ factory in Krnov, Czech Republic, within a year. In January 1984, a new five-manual organ with an electropneumatic tractor and 85-register, 8-line (Setzer) combination was opened (RIEGER Op. 3540). After the grand organ was handed over, the two-manual 18-register telegraph was originally designed in the chapel (originally a small orchestra) of the Knights of Malta (originally a small band), which was originally located above the sacristy. This instrument could be heard from the grand organ's play table, but also independently during liturgy or concerts in the church space. 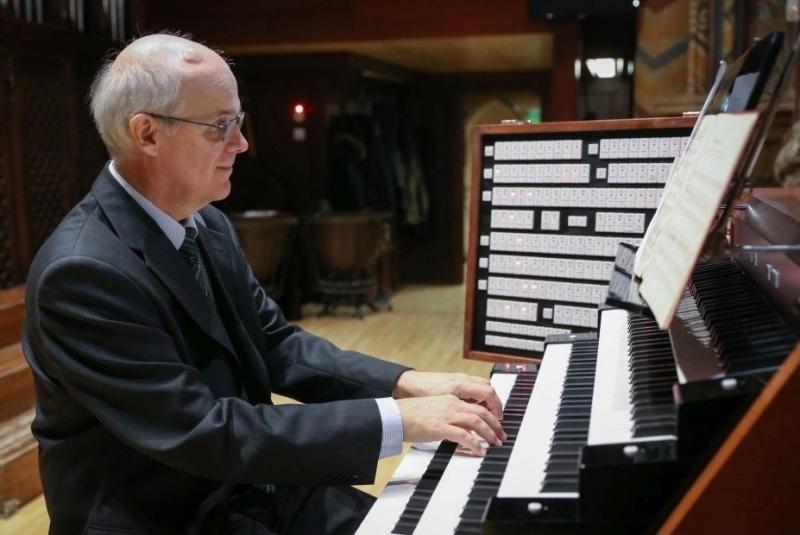 Bertalan Hock is an organist Born in 1953 in Budapest.

He began his organ studies at István Baróti, and after graduating with a degree in electrical engineering from the Liszt Ferenc Academy of Music, he studied with Ferenc Gergely, where in 1980 he received a diploma in organ music.

From 1980 to 1982 he was a scholarship holder at Rainer Böhme Ferenc Liszt College of Music in Weimar. Since 1976 he has been the organist of the Church of Our Lady of Budavár and the designer of the organs of the church. Since 1990 he has been the organ teacher at the György Solti Music School. Organologist, instrument historian, monumental expert on the restoration of many historical organs. Regular concerts at home and abroad.

Founder and artistic director of the Matthias Church Sunday Organ Series. In addition to numerous radio recordings, he has contributed to recordings and CDs. He has released several solo albums.